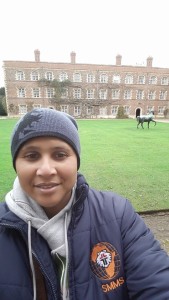 *Sent from “her desk” at Wesley House in Cambridge, UK.

I left SA on Thursday 18 February 2016 to be hosted for a period of 6 months at Wesley House in Cambridge (United Kingdom). I am doing some research on Identity Studies (How the biblical formation of identity/ies constructs or destroys fluidity of identities within a specific area and/or for a specific people). Furthermore, I am attached to Wesley Church in Cambridge, one of the biggest Methodist churches in Cambridge. Where I will be given opportunities to learn more about the British context and the church in Britain as a whole. Wesley House is where I will be given formal/informal formation studies by Rev Dr Cindy Wesley and Rev Dr Jane Leach.

This initiative was launched in 2014, when the principal of Wesley House visited Seth Mokitimi Methodist Seminary, the primary aim is to create a partnership between the two theological institutions. I was at that time in my 1st year at SMMS, as a probationer minister with the MCSA. I was approached by the Dean of Studies at SMMS, Dr Marie to inform me of this initiative and the likelihood that could be a candidate to launch their pilot program for exchanging students for a period of 9 months (June to Sept) to complete an academic year at the University. To cut a long story short, it has been an amazing journey towards February 2016, which began back in April 2015, with many potholes (pure South African), many stressful months waiting to be passed for a VISA from the UK Government, to the point where I arrived for my last year at seminary and all I wanted to do, was to enjoy these last few moments with my class of 2014, the best class at SMMS, as Rev Dr Pete Grassow used to tell us, needless to say, he said that to every class he taught. Bad line Doc. But we forgive you.

Upon my arrival, I was met with the coldest and most wicked weather ever, minus 1 degrees Celsius, coming from a warm Cape 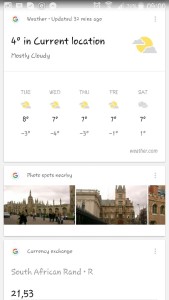 Town. However, the principal waited for me, even though my flight was delayed for almost an hour. This is an experience I would not have been granted had I not been at seminary, hence, I hope to make the seminary proud by upholding their values and live out the call that is upon my life, even amongst the world and its many nations. I attended my first few mornings of Morning Prayer, very different from morning chapel at SMMS. We do not sing here. That is weird! I attended my first Cluster worship under the Cambridge Theological Federation, which was led by the Student Forum. Wow, what an experience. So many nations were present with French, Latin, Spanish and English as the predominant languages used. Talk about broadening my horizon. I need to expand my circle of friends and grab a dictionary while at it, due to the weird pronunciation of words and phrases used here. I am lost most of the time, however, in my free time, I do take myself around town, on foot. Oh, and here’s more bicycles then cars. I will soon get myself one, to commute to the library.

Thank you to all the parties involved in making this a memorable experience. I wish all a change of heart Lenten season, as we journey through this season and remember that crucial sacrifice that was made for all of us.

The Young Traveller in true Methodist style. I sing all the time.