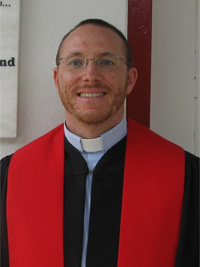 Dr Scott Couper is an adjunct Lecturer here at SMMS – A North American, living amongst people in poverty and a leading expert on Albert Luthuli, Scott comes to us from First Congregational Church, Winter Park, Florida. This is how he sees the work of SMMS and his mission to Christ’s Church.

How would you describe the mission of the ministry you serve in South Africa?

Seth Mokitimi Methodist Seminary (SMMS) is a young, vibrant, cutting-edge seminary that has provided theological training for six years. Though Methodist in ethos, the school is ecumenical as its instructors and students come from many different faith backgrounds. Staff and students are also multiracial, multilingual, and multinational. Going very much against the grain and in opposition to what many say is impossible within one institution, SMMS is dedicated to pioneering processes that intimately integrate academic and ministerial formation programs. In other words, SMMS develops intellectually and spiritually mature Christian leaders.

SMMS offers a Bachelor’s degree in Theology and a Diploma in Practical Ministry. Students live, work, study and worship at the Seminary for three years. SMMS is also credited Higher Certificate in Christian Ministry and thus will offer a distance curriculum for those who do not reside and study on the campus.

The Seminary’s namesake was a much admired mentor of Nelson Mandela (see Mandela’s autobiography Long Walk to Freedom). In 1963, during the height of Apartheid, Seth Mokitimi (1904-1971) became the first black President of the Methodist church in South Africa. The contentious decision to elect Mokitimi leader threatened the legality of all local churches located in ‘white’ areas because the individual that led the Methodist church had legal title of its properties (Reservation of Separate Amenities Act of 1953). Yet, Mokitimi was held in such high esteem that the wider church risked mass expropriation of its property and thus its local churches in White, Coloured and Indian designated areas. The ‘watchword’ of a new South Africa, Mokitimi said, “must no longer be White or Black, but Black and White, none regarding the other as a menace but each in his own way contributing toward the full harmony of our South African life”.

Through segregated and inferior Bantu Education, the Apartheid regime decimated education in South Africa. The white supremacist government viewed mission schools, and hence their institutions for ministerial formation, as threats and over the decades closed school after school. Since 1994, humanities faculties and theological schools within universities have also been weakened if not eliminated all-together. There are few institutions in South Africa that offer what Dietrich Bonhoeffer’s termed Life Together. Even if theology departments and seminaries exist, often academics and ministerial formation are divorced. SMMS understands that the pastor’s intellect and spirit must primarily be developed together – through community – and not through correspondence, internet or by the televangelists. SMMS develops spirit-filled public intellectuals to lead the church in a new era.

The University of KwaZulu-Natal’s (UKZN) Department of Religion, Philosophy and Classics links the development of African theological thought with the world. The University provides a context where much interdisciplinary thought (science, sociology, linguistics, history) can cross-pollinate with theology. The University is able to provide a formal academic platform to produce and publish African theology (Ujamaa Centre for Community Development and Research) to a wider audience whose default settings are often still very western. In addition to Bachelor’s degrees, the University produces many Masters and PhDs level graduates.

How do you fit into their mission?

I seek to combine my passion and fifteen year experience as a local church pastor with my academic credentials to contribute toward the intellectual and spiritual growth of the next generation of African ministers.

To SMMS and UKZN, I represent its multinational (North American), ecumenical (Congregationalist), and multiracial (White) ethos. Though White and western, all of my professional life has been in Africa leading African congregations (Black/Coloured/White, Urban/Rural, English/Afrikaans/isiZulu speaking). I am a multiple hybrid and thus versatile and knowledgeable.

To SMMS and UKZN, I am multidisciplined, with formal education in International Relations (BA), Theology (MDiv) and History (PhD). I have graduated from North American and southern African institutions of higher learning.

Perhaps most importantly, I perceive my vocation to be located and intimately accountable to a local faith community. Therefore, to SMMS and UKZN I represent a fusion of the practical (ecclesiastic) and theoretical (academic).

As a lecturer at SMMS, I teach Systematic Theology, Missiology, Ecumenism, and Christian History. As a lecturer at UKZN, I also assist in supervising students that are earning their masters and PhD degrees. I publish peer reviewed journal articles thus contribute to the UKZN’s research output and reputation.

I benefit the schools as I am a volunteer, essentially lecturing without receiving remuneration.

What led you to engage in this calling?

I was confirmed in the United Church of Christ (UCC).  My mother is an ordained minister (UCC).  I served as a chaplain appointed by the UCC (Penn Northeast) to a small congregation at the age of nineteen.

While studying in Santiago, Chile, I attended a Good Friday service where the emaciated and brutalized body of Jesus was carried down the isle of the cathedral as many wept.  For the first time, I saw him who I claimed to worship since I was twelve, yet who I did not really ‘know’ nor had ever ‘seen’.  I decided at that point to serve him, for I saw him and he was real for the first time.  Then and now, I only wish to serve the Church, the Body of Christ.

Is there a passage of scripture that carries special meaning in your daily work?

Romans 8:28, “All things work together for good for those who are called according to God’s purpose”.  Much good and much bad happens in our context.  However, in relationship with God, even the most heart-breaking experiences can with healing and support lead to growth, improvement and a demonstration of God’s glory.

What are some of the challenges facing SMMS and UKZN and your family?

SMMS is achieving what many within the theological education believe cannot be done simultaneously: academics and (ministerial) formation. As an institution, SMMS has to maintain academic accreditations with secular standards while simultaneously develop and nurture future leaders. To discipline and reprimand while empowering and loving is difficult to say the least.

SMMS is a young institution. To envision, develop, and implement programs and procedures from scratch that are fair and consistent but still allow for grace and mercy is a challenge.

A great deal of funding enabled the school to have facilities that are modern, practical and aesthetically beautiful. However, it is a great deal more difficult to raise money for ‘operational costs and salaries’ than ‘bricks and mortar’. The school struggles financially to maintain an enviable facility and to pay staff to occupy and staff its lecture halls and offices.

SMMS accepts students who might not otherwise have the academic ability or credentials to enter university. However, SMMS must educate to the same standard as a university. Most students speak English as a second or third language. Writing and reading comprehension is often very poor. As the purpose of the Seminary is not simply academic, but ministerial, a difficult tension exists for faculty to be ‘brothers and sisters in Christ’ to and ‘mentors with authority’ over students.

Our family struggles with being separated for extended periods of time from family, particularly our children from their grandparents and cousins. Not being present when parents and grandparents pass away is especially difficult.

Our family lives in a township (high density ghetto). Crime is high. We experience ‘service delivery protests’ when our road are shut down by rioters. Due to infrastructural decay, we often have no electricity and/or water for short periods of time. Our area often suffers from ‘xenophobic’ attacks whereby Africans from other countries are persecuted and killed.

Limited separation from our son while at boarding school is trying.

What lesson have you learned working alongside the staff and students of Seth Mokitimi Methodist Seminary that you would like to share with churches in the U.S.?

‘We are Black and White, male and female, Jew and gentile, slave and free. Yet, nonetheless, despite this, we are all one in Christ Jesus’.

SMMS is a microcosm of global Christianity. It is ecumenical, multiracial, multilingual, over educated and under educated, privileged and disadvantaged. Yet, we all worship together every morning before classes begin. We easily sing in five languages every morning. We sing African songs and European songs. We dance and we keep silence. Some of us are comfortable at any one point in a service while others are uncomfortable. Yet, we stretch and grow one another – everyday out of our comfort zones. Some of us are conservative, others liberal. Some are strong, some weak. Some are wounded and thus lack confidence and others too self-assured. Some cerebral, others ‘enthusiastic’. Yet, we learn, discuss, argue, pray, sing and eat together. We try with one another to maximise our strengths and minimise our weaknesses.

Despite our differences, we are all Christians. And that is a tie that binds when we are intentional about holding on to one another.

What is a common phrase used in the local churches?

I greet you in the name of the Father, the Son and the Holy Spirit!

Are there books that have shaped your understanding of your work in South Africa?

Which movies have shaped your understanding of your work in South Africa?