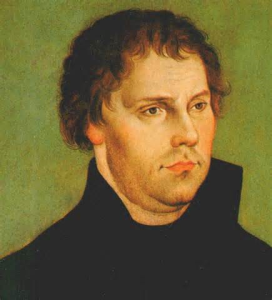 On 18 February 1546, the famous German reformer Martin Luther died in Eisleben, German. That means only three days ago, it was the 470th anniversary of Martin Luther’s death. Perhaps many of you saw it in the news. It seems that recently many things related to Martin Luther are being recognised.

It was announced last month that the Pope would visit the Swedish city of Lund at the end of October 2016 to begin to commemorate the 500th anniversary of Martin Luther nailing his Ninety-five Theses to the door of the Wittenberg Cathedral (thus sparking what is known as “the Reformation” and thus ‘turning of the world upside down’). The service will be historic, for many will rightly see the joint Catholic and Lutheran service as the beginning of the healing of a five-hundred-year old wound. The five hundred-year old wound exists even outside our building, in the space between our church and the adjacent Catholic Church. Our Catholic brothers and sisters in Christ worship separately, though Jesus prayed in the Garden of Gethsemane that “they may all be one” (John 17:21).

Perhaps you also read in the news that recently in a service in Rome, Pope Francis asked that forgiveness be given for the way Catholics had treated other Christian believers over the years and also invited Catholics to pardon those who had persecuted them.

In fact, while you may not have known it, we are in the midst of what is known as “The Luther Decade”. For ten years leading-up

until 2017 (next year), there have been and will continue to be special themed concerts, exhibitions, church services, festivals and theatre productions that highlight the importance of the Reformation. No doubt most of these commemorative events take place in Europe. Yet, why should the beautiful and wonderful folk at Bethel Congregational Church (UCCSA) miss out on all the fun? Hence, we begin today a four-week sermon series entitled, “To Be Reformed”.

In our series “To Be Reformed”, we will explore who we are as Protestants and in what we believe as it regards to our faith in Jesus Christ. In this series, we will not explore the history of the Reformation (that you will have to study on your own). Rather, we will explore our faith as it concerns the Reformation. What are the spiritual tenets upon which we worship at Bethel Congregational Church (which is a product of the Protestant Reformation)?

Let us begin with Protestantism. What word do you see in “Protestant”? That is right, ‘protest’. Five hundred years ago, many beliefs and practices of the church were ‘protested’. Those who protested were called ‘Protestants’. What is Protestantism? The famous theologian Ernst Troeltsch best explained that Protestantism is a “modification of Catholicism in which Catholic problems remain, but different solutions are given”.[1] So, while Protestantism did not solve all our theological questions, it did offer very new perspectives on those questions.

In our sermon series, we will explore each week a new theological question from the perspective of Protestantism.

Today, we ask Martin Luther: “How is a person saved?”

Let us start from the beginning. In the beginning, in Genesis, it is explained that there exists a broken relationship between God and humans. During the course of human history humans always have made efforts to restore that broken relationship with God, arguably with more failures than successes. Our Hebrew ancestors often understood the relationship to be partially healed by our obeying the commandments, or the Law, and our offering sacrifices at a place of worship (say, at the Temple in Jerusalem).

When our obedience was not enough, God would ‘step-in’, so to speak, and God would ‘save’ humans in the course of human history (say, from the Egyptians, or the Assyrians, or the Babylonians or, in Jesus’ time, from the Romans). But, also during Jesus’ time, our Hebrew ancestors began to wonder, “How is a person ‘saved’ after their death?” In other words, ‘How do we get to heaven?’ How are we to be eternally reunited with the God who created us?

Martin Luther deeply struggled with this question. He was terrified of God’s wrath, of hell. Martin Luther suffered from what one might call a ‘guilty conscience’. Luther believed deep down that he was unworthy to be reconciled to God. And so, for Luther, God was someone to be hated, not loved, because no matter what Luther did, Luther never felt good enough to be reconciled to God. Luther tried. He became a monk, he fasted, he studied, he prayed, he went to Rome, he gave his offerings, he sang, he worked, he confessed, he repented and he preached. Luther almost killed himself trying to be good enough for God to love him. The more Luther tried the more he sensed God’s wrath. Luther suffered mental and physical breakdowns trying to be good enough to please God. Until, one day, in the year 1515, Luther read our scripture reading this morning which says, “For in the gospel the righteousness of God is revealed – a righteousness that is by faith from first to last, just as it is written: The righteous shall live by faith” (Romans 1:17, notice that Paul quotes from Habakkuk, our Hebrew scripture reading today).

In our scripture reading this morning from the apostle Paul in the book of Romans (and perhaps, better, in the book of Hebrews), Paul recalls the faith of our ancestors and explains that it is Jesus Christ that reconciles us to God – not temples, not priests, not sacrifices, not obedience to the commandments, not adherence to the Law and not good works. Rather it is faith, or an inner relationship with God through Christ, an inner trust in God through Christ, an inner love of God through Christ that alone reconciles us to God because Jesus Christ’s death and resurrection closed the gap, so to speak. In short, it is an acknowledgement of, a belief in and an acceptance of God’s love and mercy as demonstrated in Jesus Christ that saves us. We don’t earn God’s love, we through faith accept it. Hence, the mantra or the clarion call of the Protestant reformation is and has been “Justification by Faith”.

So, a question all of us may have is this, “Well, if the apostle Paul preached on ‘justification by faith’ almost 1,500 years before Luther’s time, why did the church at the time and Luther not know about it?” Well, first, during Luther’s time, most people, even some priests and monks, did not know how to read. And even if they could read, most read the Bible only in Latin rather than the original Greek. So, in short, most people did not really know what the Bible said (they only could learn by listening, looking at pictures or watching dramas/plays)!

the keys of the kingdom of heaven; whatever you bind on earth will be bound in heaven, and whatever you loose on earth will be loosed in heaven”. The church used this scripture to justify the authority of the Pope and the power of the church over all people. All humans fall into the trap of claiming the power of God over other people. Even in many Protestant churches, even Congregational churches, today ministers run the church like they are amaKhosi, dictators. Many deacons judge and condemn people in the church, denying them Holy Communion for some wrong. Historically, in our country churches have denied people of different races to worship together. Even today, some churches deny Christians a place at the table due to their sexual orientation. The church, even the Protestant church, has in the interests of power, betrayed the doctrine of ‘justification by faith’.

There was one practice in the church of Luther’s day that epitomised how greatly Paul’s doctrine of Justification by Faith had been forgotten: indulgences. The church during Luther’s time believed that humans sin, and in order to appease God and rid ourselves of sin, humans had to do ‘good works’. Well, it was said that the saints of the church had done so many good works that they had extra ‘merit’ that they did not need. So, humans could, by buying an indulgence, that is by giving the church an offering, buy the ‘merit’ or good works of the saints and thus receive forgiveness for their own sins. What would that be like? Well, let us say that the late Reverends Sam Marie was now a saint. Sam had a “treasure chest” of good works. Let us say some of you have a potty mouth. Well, you could continue to have a potty mouth, if you donated money to the minister, that is, to me (to help me buy a new car of course), and if you donated money to the church, through Frank, the treasurer, so the church could get new carpeting. In return for your donation, the church (as decided by me and Frank) would forgive you for your potty mouth. In addition to that, if you had an aunt or uncle who had a potty mouth, you could buy more indulgences and that would help him or her get out of hell. And, you could, for some more donations to the church, even have future sins forgiven! Sounds like a good system, hey Frank? In short, the selling of indulgences was the selling of God’s forgiveness. And the church abused its power by selling these indulgences to the poor, who could not read the Bible. And so the church became rich and powerful.

Next year, five hundred years ago, Martin Luther nailed his Ninety-five theses to the door of the Wittenberg cathedral protesting 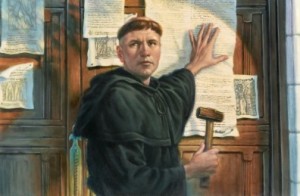 the selling of indulgences and other practices of the church. And the rest, as they say, is history.

So, back to our question: “How is a person saved?” Martin Luther and the Reformation stated that according to the Bible, and specifically the apostle Paul, we are saved, or justified, by faith and faith alone. In other words, our relationship with God need not be mediated or controlled by Scott, a priest, the church, by money or by any good work. No. Our faith tradition subscribes to an understanding that we all have direct access to God’s forgiveness, grace, mercy and, most of all love.